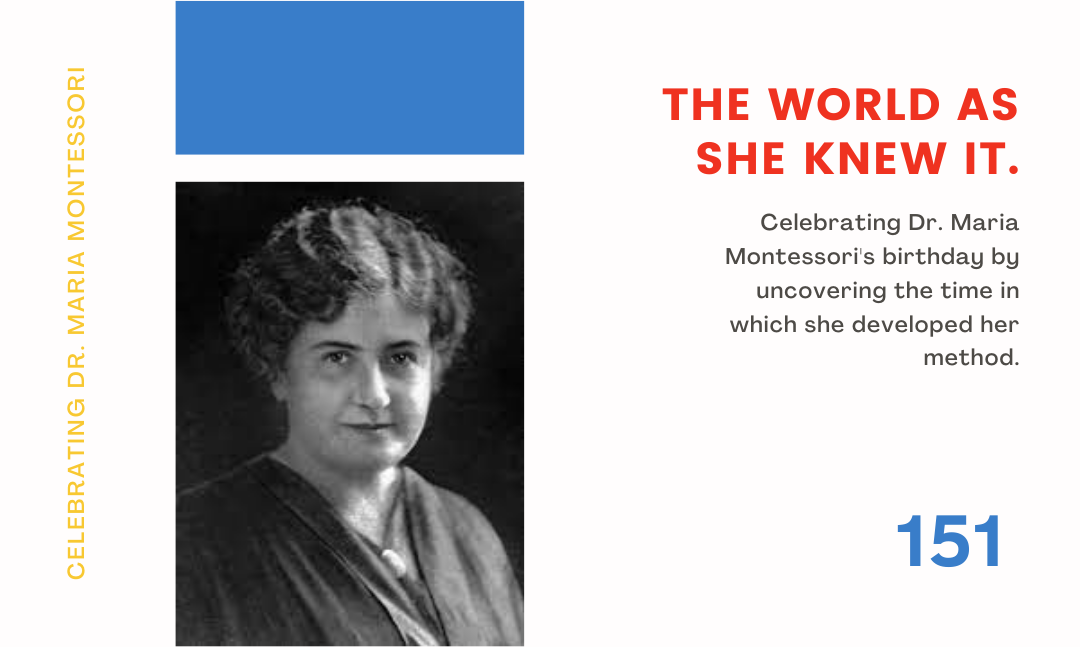 Aug. 31, 2021 marks what would have been Dr. Maria Montessori’s 151st birthday. A lot has changed in 151 years, but her lessons and the model she developed have remained consistent. On our blog, we talk about the Montessori Method, how it’s used in classrooms around the world and the impact it has on everyday life. Her method, though rooted in the biological development of the child, has ties to the time in which she lived and taught. We’re all influenced by our cultural surroundings, after all! To add some perspective to her story and in honor of Dr. Montessori’s birthday, we’re sharing what was happening around the world during her formative years.

A time marked by war and post-war recovery.

Peace is a major component of the Montessori Method. Dr. Montessori gave multiple presentations on the importance of peace and its intersection with education. In fact, she was nominated for a Nobel Peace Prize three times.

When you consider the time in which Dr. Montessori grew up, her stance is not surprising. She shaped young minds during the course of two World Wars and fled several countries as a result of uprisings, civil wars and conflicts during her tenure as an educator. In 1870 America was still in flux five years after the end of the Civil War. But progress was being made, and in the year of her birth, Black men were given the right to vote in a historic amendment to the constitution. Peace was not universal, though. The Franco-Prussian war broke out in 1870, ending the Second French Empire and giving birth to the French Third Republic and German Empire.

A season of inventions and technological discovery.

Dr. Montessori was raised in a time of great progress and discovery. In fact, some of the most monumental inventions were created during her formative years. Only six years after her birth, Alexander Graham Bell produced the prototype for the first telephone. One year later, Thomas Edison would invent the phonograph. Other inventors spent their time perfecting new technologies – like the light bulb, headphone jack and steam drill – throughout the 1870s. Many historians call this era the Technological Revolution or the Second Industrial Revolution. In the United States, these advancements brought on an era of steep economic growth referred to as the Gilded Age.

An era filled with fundamental fiction.

You may not instantaneously think you’ve read a work of fiction from the 1870s, but with the number of classics that were written during that decade, you might be surprised! Books of exploration and societal evaluation marked the time. Transcendent works of fiction like “Around the World in 80 Days,” “Through the Looking Glass,” “The Adventures of Tom Sawyer” and “A Doll’s House” were all published during the 1870s.