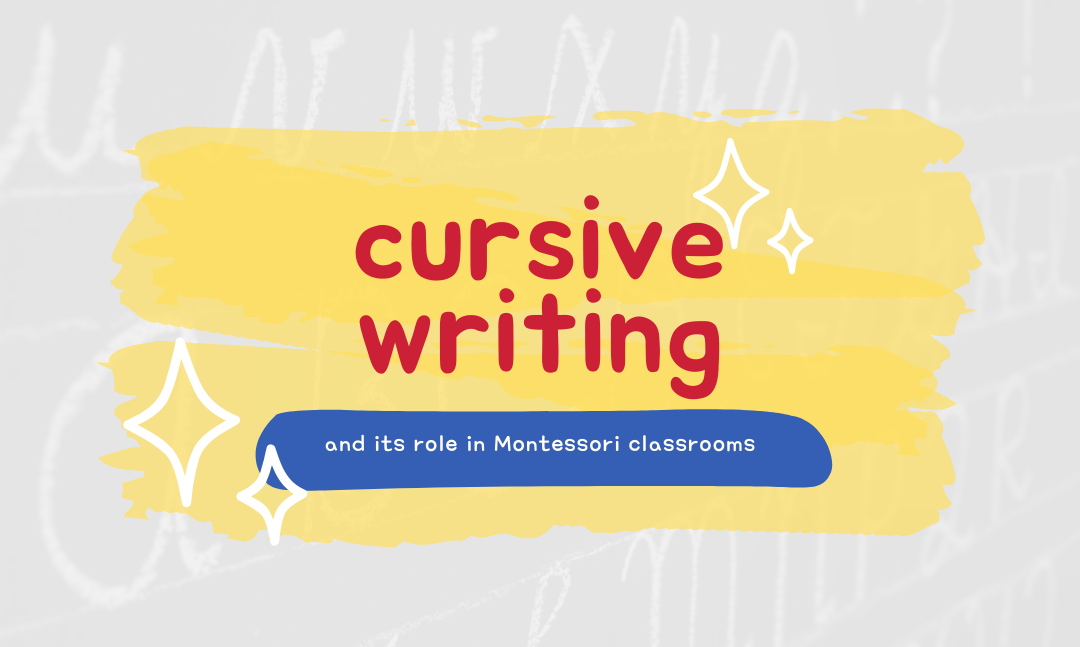 Penmanship is rarely listed on elementary schoolers’ lists of favorite courses. It seems silly to learn another way to write after you’ve already mastered printing! Many American schools have moved away from the practice, as it’s not a required course in the Common Core State Standards for English.

If you visit a Montessori school (or the homepage of our website), you’ll see materials featuring cursive letters in primary classrooms. Cursive writing is a critical component of Montessori education, and has been since its inception. In fact, students in Montessori schools learn to write in script before they learn print. Why is this? There are several reasons.

If you think about printed letters, each is a combination of straight lines and circles or semi-circles. For children who are learning to use their hands to write for the first time, these strokes are especially challenging and unforgiving. Dr. Montessori felt strongly that this style of writing was not best for young writers to learn, as she outlined in this passage of “The Discovery of the child.”

“Must one begin with strokes? The logical answer is ‘No.’ These require too much effort on the part of the child to make them. If he is to begin with the stroke, it should be the easiest thing to execute. But, if we note carefully, a straight stroke is the most difficult to make. Only an accomplished writer can fill out a page with regular strokes, whereas a person who is only moderately proficient can cover a page with presentable writing.”

Cursive letters are less easily mistaken for each other

One of the common errors children make when learning to write is mistaking letters for each other. In print writing, d’s are often mistaken for b’s while q’s and p’s are also inadvertently swapped. In cursive, these letters are less similar in formation and appearance. For children first learning to write letters, the sharp distinction between these letters is tremendously helpful.

Cursive letters within the same word are connected, making it easier to read a child’s writing

Appreciating and understanding a young writer’s work can be challenging when they are building penmanship confidence. Letter spacing takes time to master, but is an important component of legibility. Educators and parents may struggle to clearly see where one word starts and another begins. This can prevent helpers from fostering curious conversations about the child’s piece as they struggle to understand what is written on the page. In cursive writing, letters within the same word are connected. These connections can help adult readers understand what children mean and support their creative writing development.

Cursive writing isn’t just about learning to put words to paper. Formation of the script letters helps children develop fine motor skills and hand-eye coordination. Through the formation of letters and words, they are building muscle memory that will later support other tasks. Simultaneously, they’re creating motor pathways that allow for faster writing and note taking as they become more practiced. This skill will only benefit them in their future personal, academic and professional endeavors.